Feeding your horse the correct type of horse food is vital for supporting the general health and well-being of your horse; it isn’t just a case of supplying energy and nutrients although this is equally as important to meet the demands of exercise. With many things that can go wrong if the diet isn’t right, it’s important to try and avoid feeding things that aren’t considerate of the horse’s digestive system. That’s why fibre is an important part of your horse’s diet. Fibre is a great addition to your horse’s diet due to the fact it provides good energy for competing in a slow-release form. Fibre also helps to keep the digestive system healthy. Read on as we discuss why your horse should be competing on a fibre-based diet.

The Difference in Feeds

The source of fibre that you give to your horse and how useful that fibre is, is dependent on the forage source and the maturity at the time of harvest. Alfalfa chop contains just as much energy as a cool mix; however, it may be better for the horse’s digestive system due to the fact it has around 10 times less starch than cereals. It also may be less likely to cause excitable behaviour in your horse.

A  study in Edinburgh was carried out that showed a large body of evidence that suggested the choice of feed for your horse to give a slow-release energy source is from a fibre-based diet and oil. When compared to a fibre-based diet, researchers at the University of Edinburgh found that a cereal-based diet of concentrate mix may provide 22% starch. Compared to the fibre-based diet at 2%, this is a huge difference; however, both diets provided the same amount of energy overall. The results of the study also showed that horses who were fed cereal-based mixes were less consistent in their behaviour whilst also being more reactive to new situations and equipment. They were also found to have a higher resting heart rate compared to the horses who were fed fibre-based diets. 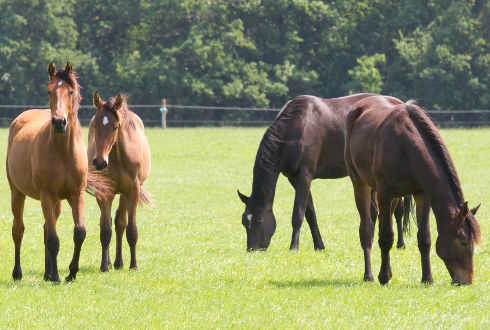 The study found that alfalfa feed with a light coating of molasses and cool feed gave the same amount of energy, however cool mix provided 20% starch compared to 2% from the alfalfa with molasses. It also showed that alfalfa with an oil coating and competition mixes gave a slightly increased amount of energy, however, competition mixes provided a larger amount of starch at 25% with the alfalfa and oil providing only 2%.

How To Feed Healthier

When your horse feeds on fibre rather than cereal-based feeds, the same weight of fibre takes approximately 3 times as many chews as cereal which generates more saliva. This may naturally keep the environment in your horse’s stomach regular and as it should be. By eating more fibre, this helps stop things in their stomach from splashing around too much. By feeding a double handful of chopped fibre before fast work, it may keep the stomach in good health.